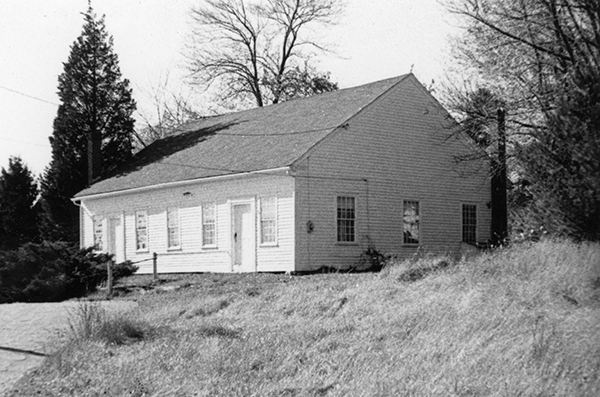 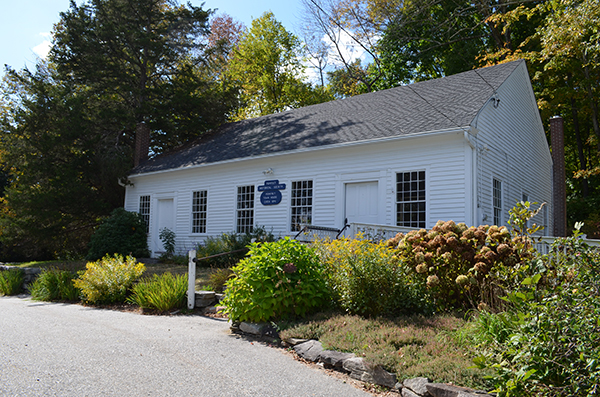 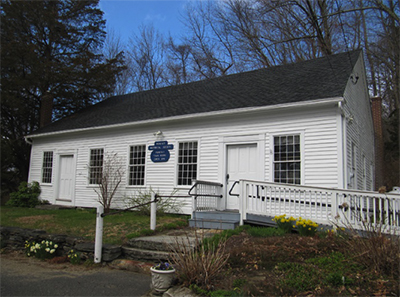 Pomfret’s Old Town House has been owned and maintained by the Pomfret Historical Society since 1979 and was listed in the National Register of Historic Places in 1989. It is historically important because it was the first municipal building owned by the Town of Pomfret and is one of the few purpose-built early town halls remaining in Connecticut – two others are in Mansfield and Stafford.

In the early days of Pomfret, Town Meetings were held in various locations in town such as churches, schools, taverns, and mills. This was done so that each part of the town had an equal opportunity to host this important meeting of townspeople. Unfortunately, this resulted in the meetings being packed with local residents who often passed articles that favored their areas. When the meeting moved to another locale these acts of the previous meeting were sometimes reversed leading to a somewhat chaotic form of town government.

As early as 1830 discussions were held regarding a central location for Pomfret’s Town Meetings, but with five villages, Pomfret, Pomfret Center, Pomfret Landing, Abington and Elliott no consensus was arrived at. Finally, in 1840, it was decided to erect a Town House and a committee of three, one man from each of the neighboring towns of Hampton, Thompson, and Killingly was constituted to determine the location of the building. The location was in the approximate geographic center of town and roughly equidistant from the population centers of Abington, Pomfret, Pomfret Landing, and Pomfretville (now part of Putnam).

The building was used primarily for Town Meetings and is essentially an open hall with a small raised platform at the north end. The day to day business of the town was usually conducted at the homes of the Town Clerk and other town officials. In recent years a grant was obtained to enable the building of an addition on the south end of the building, housing a kitchen, toilets, and a central heating system, the latter two because a stove for heating and his and hers outhouse were no longer in vogue.

The Old Town House has been used for meetings by town boards and commissions, the Pomfret Public Library, and the Pomfret Community School. It is available for rental when not is used by recognized town organizations – call (860) 928-0304. 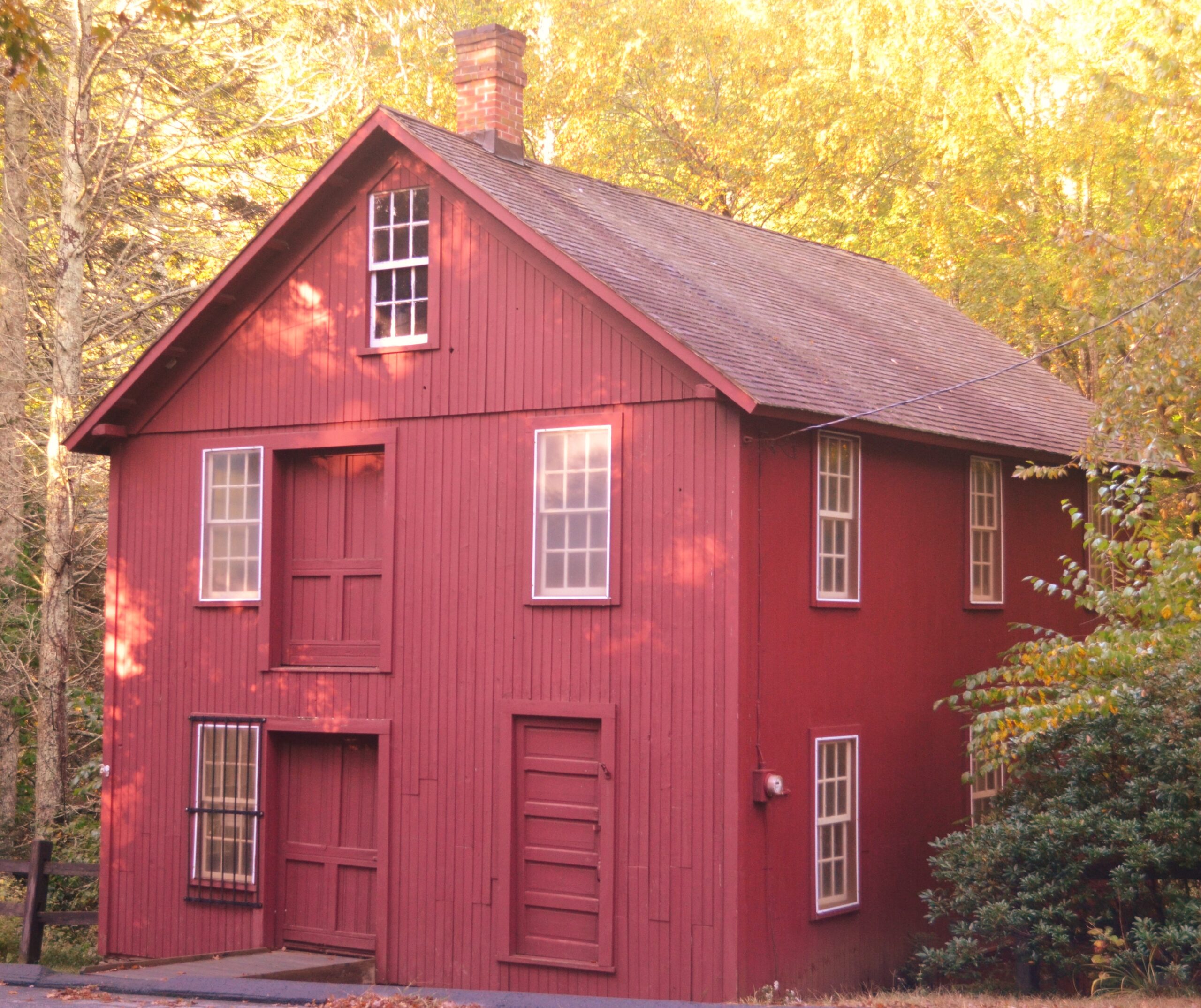 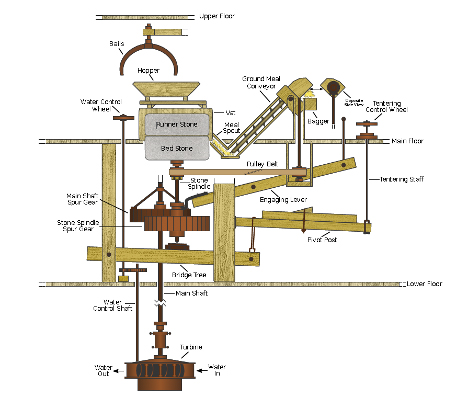 The Brayton Grist Mill is a historic grist mill located in Pomfret, CT on the entrance road to Mashamoquet Brook State Park, of US 44. It is a post-and-beam frame structure, four stories in height, with a gabled roof and clapboarded exterior. Mashamoquet Brook parallels the road, descending in a southerly direction, and passes west of the building.

The Brayton mill was powered by water from a millpond fed from the Mashamoquet Brook. The elevation drop from the mill pond provided the grist mill a force to turn the horizontal turbine located below the structural base of the building.

The mill is no longer functional. However, the equipment remains and includes the critical components of a functioning Grist Mill located over several levels of the building. These include:

The third level housed water drive wood milling equipment at one time. It now houses a collection of blacksmithing from Orin Marcy who’s blacksmithing shop was directly across from the Brayton Mill the tools and equipment. 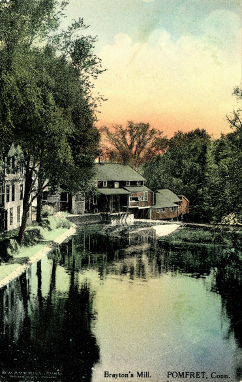 Mashamoquet Brook was the site of a number of early mills, dating at least as far back as 1816. This mill was built by William Brayton c. 1890 from materials salvaged from older mills that were on the site. It is the last surviving mill of several that are known to have lined Mashamoquet Brook in the area. Brayton died in 1928, and the state purchased the property in 1930 as part of an enlargement of the state park.

The mill is one of the best-preserved 19th-century rural grist mills in the state. It was listed on the National Register of Historic Places in 1986.[1] The mill was restored in the 1980's and is maintained by the Pomfret Historical Society as the Brayton Grist Mill  & Marcy Blacksmith Museum.

The Museum is open by appointment only due to the Covid-19 Epidemic.

Please contact John Charest, President of the Historical Society at 860-460-6689 or jacharest52@gmail.com  to set up your time.